The Networks: Telly Time is an mini-expansion for The Networks that I’ve been wanting to do for a while – a set of Shows based on classic British television! I will release this mini-expansion at UK Games Expo in 2018. It will be available in retail worldwide soon afterwards.

Note that you must have The Networks base game in order to play Telly Time! The base game will be available anywhere games are sold on April 4, 2018.

Telly Time will cost $15 USD, which will probably translate to between £11 and £13, depending how stores handle VAT. You can pre-order it here.

Telly Time comes in a small tuckbox, which contains 59 cards and 35 small plastic chips. Most of the cards are new TV shows.

And yes, the puns are just as bad.

What’s in the box

45 of the cards in Telly Time are brand new Shows. There are three new Genres represented: 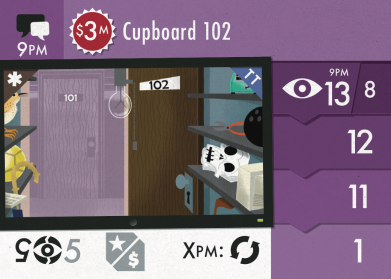 Chat Shows have a special power: the moment you Develop one, you may rotate all Stars and Ads in one of your timeslots (including the one the Chat Show is going in) to their good sides.

Quiz Shows also have a special power: at the end of each Season, you may use any Quiz Shows active in your lineup to convert money into Viewers at a rate of $1M to 1 Viewer, up to $3M for 3 Viewers for each active Quiz Show in your lineup. 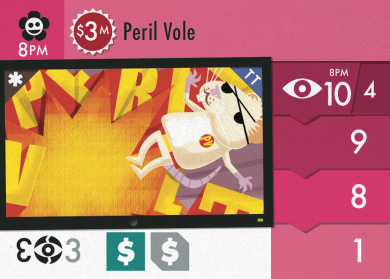 Kids Shows have no special explicit powers, but tend to get you a lot of Viewers for their cost, and you can stuff them with Ads. But they only want to go on your earliest slot, with a big penalty if you put them on in the wrong time slot.

(The asterisks in the upper-left corners of the cards are for setup, to ensure as equal distribution of Genres as possible.)

These 3 new Genres make for a total of 9 Genres. In Telly Time, you no longer get a Genre Bonus for getting 3 or 5 Shows of the same Genre, as that would be too difficult.

Instead, each player will get a different Genre Bingo Card. Whenever you develop a Show, you cover its corresponding Genre with a plastic chip on your Bingo Card (if it’s not already covered). If you ever get 3 chips in a row (noughts and crosses, or tic-tac-toe to Americans), you get a Genre Bonus, and remove the 3 chips in a row.

Each card has a Genre-Bonus-O-Meter at the top. You’ll start with a plastic chip on its leftmost space. Whenever you get a Genre Bonus, you’ll move it one space to the right. If you get it to the rightmost space, you’ll score a 5-Show Genre Bonus. 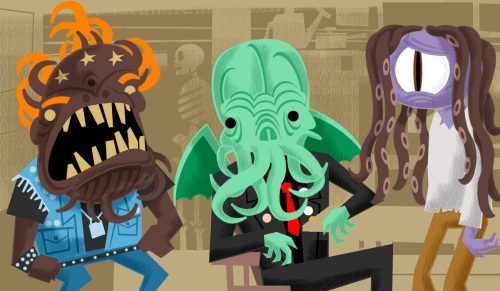 Telly Time comes with replacement Network Cards that replace their counterparts in the base game anytime you play with it. “Good Branding” now gives 3 Viewers for every Show you have of the same Genre, and “Market Research” is now an immediate card that allows you to place a chip anywhere on your Bingo Card.

The Networks: Telly Time is fully compatible with The Networks: Executives. Mogul Cards work the same way, except that you pick them up when you move the marker on your Genre-Bonus-O-Meter to the end.

The player who takes Specialist is the only player in Telly Time who gets a Genre Bonus when getting 3 Shows of the same Genre. If they push the chips on their Genre-Bonus-O-Meter all the way to the right a second time, they get a second Mogul Card. 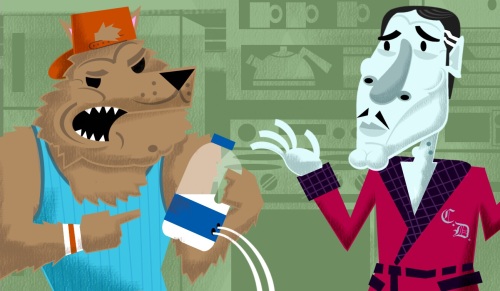 To be honest, when I started Telly Time, I expected this to be just a pack of funny Shows with maybe some interesting new Genres. The Genre Bingo Card originally required players to fill out the entire card, but my playtesters suggested that they really wanted to play tic-tac-toe (noughts and crosses). Once I put that in, Telly Time really came into its own.

I’m really proud of this expansion. It came together ridiculously quickly, and Travis and Heiko worked very hard to meet a crazy deadline. I’m looking forward to playing it with all of you!

Thank you! You have successfully subscribed to our newsletter.